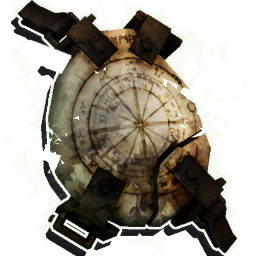 Runes are made from carved chunks of whalebone. They are resources which are found throughout the city of game world. They can more easily located using the Heart which was given to Corvo by the Outsider at the beginning of Dishonored. They are used to acquire supernatural powers which help Corvo complete his missions.

The first rune available in Dishonored 2 is found in the Void after Emily's first encounter with the Outsider.

A Crack in the Slab / Aramis Stilton's Manor[edit | edit source]

Return to the Tower[edit | edit source]

The Light at the End[edit | edit source]