From Dishonored Wiki
(Redirected from Corvo)
Jump to: navigation, search 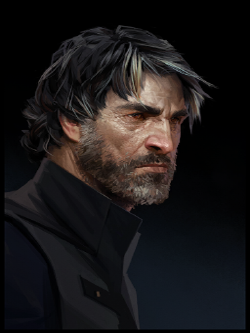 Portrait of Corvo, by Sokolov

Corvo Attano is the protagonist of "Dishonored" and one of two protagonists in "Dishonored 2". He is a native of Karnaca, the southernmost city on the island of Serkonos. At the beginning of the first game, he is the former trusted Lord Protector and confidante of the Empress who has been framed for her assassination. He also has a warm relationship with the Empress' daughter Emily.

Over the course of events in the first game, it is revealed that Corvo is actually Emily's father and this influences the second game's narrative to a great extent.